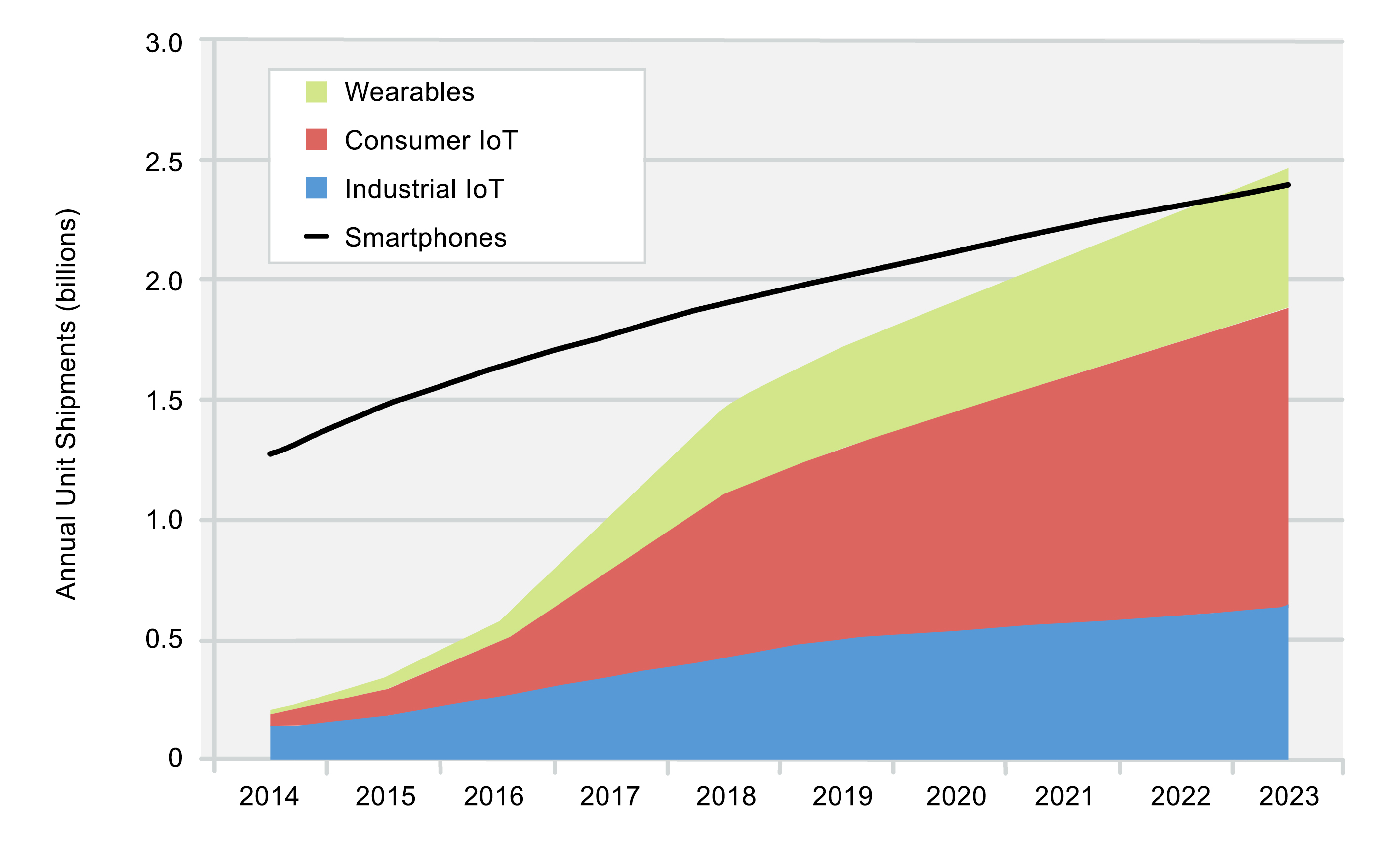 M2M market projections (Source: Linley, a Guide to Processors for IoT and Wearables, 2015)

The internet of things (IoT) will rely on the ability to place sensors anywhere they are needed. The sensors could be embedded in bridges, scattered across the fields of farms or monitoring traffic from streetlights.

Because these sensors will be distributed so widely, there will be many situations where the most efficient way for a device to connect to the Internet is through a direct wireless long distance link rather than through a nearby gateway device using short-range communications.

The ranges of protocols such as 6LowPAN and Bluetooth are generally restricted to 100m or less (although Bluetooth 5 will change this). Ideally, for low power consumption, they typically operate over much shorter distances. For highly distributed sensors in suburban areas or rural sensors this implies a relatively high density of gateways compared to the number of sensor nodes they can serve. For example, the need to install a network of 6LowPAN gateways together with laying the cable to interconnect them would quickly become prohibitive for farmers keen to monitor soil moisture levels and other environmental factors.

IoT device developers, users and integrators have a number of options to choose from in terms of low-power wide-area networks, as well as the business models to support them. Sigfox and LoRA are two protocols that provide low-power wireless access for IoT devices. The company Sigfox is building a network that it will operate to provide low-bitrate communications of less than 1kbit/s between sensor and gateway. This allows very low power operation but, due to the low data rate, software updates will need to be deployed using a second wireless connection or be performed by hand.

Like Sigfox, it operates using unlicensed spectrum to reduce deployment costs at the risk of encountering higher interference from other RF sources. LoRA is bidirectional with a datarate of up to 10kbit/s using a spread-spectrum signal that makes it possible for networks built by different operators to overlap. Unlike Sigfox, LoRA allows for multiple operators although the necessary transceiver silicon is available only from a small group of semiconductor suppliers, including the protocol’s originator Semtech.

Sigfox and LoRA demand the creation of new networks, which are gradually being built but for the moment are being concentrated on urban centres. But there is already an option that exists for the larger-scale problem of serving rural and suburban use cases – that is to leverage the existing wireless network based on cellular technology. Many machine-to-machine (M2M) applications already use the cellular network because of its already high levels of coverage worldwide. Vending machines, for example, will often communicate stocking levels and equipment problems to maintenance systems using GPRS communications.

Enhanced Coverage GSM provides an extension to GPRS that extends coverage through protocol enhancements. The revision makes it possible to receive signals that are 20dB weaker than standard GPRS. This boost in signal performance can be used to extend the range of existing cells, reaching further into the countryside in deeply rural areas or deep into basements and other locations that are challenging to all wireless technologies. The 20dB boost makes it easier to connect to devices such as water meters that are often located underground.

Operators have conducted a number of trials to demonstrate the efficacy of EC-GSM using the 900MHz band at datarates up to 10kbit/s and with a range of up to 15km from the basestation. Although EC-GSM performance is comparable with that of LoRA in terms of datarate and range, and offers though software upgrades to basestations the possibility of a rapid rollout, device manufacturers are likely to favour protocols based on the LTE protocol. LTE is more spectrally efficient than the 2G-based protocols, providing operators with a strong reason for gradually refarming spectrum used today for GSM and deploying LTE in its place.

The first option for an LTE-based IoT cellular protocol is Cat-M, which is optimised for applications that demand a higher datarate than the other IoT-focused protocols. Cat-M supports 1Mbit/s datarates for both the uplink and downlink using half-duplex communication. Although it is based on LTE, the Cat-M protocol employs a simpler transmission scheme that roughly halves modem complexity compared to the LTE implementation required for a cellular handset.

To support low-power operation, Cat-M reduces the frequency of the update cycles used to maintain contact with a basestation. It is possible to achieve ten years operation with two AA-size alkaline primary batteries if the cycle frequency is reduced to once every ten minutes. For many IoT applications that are relatively delay insensitive, such as metering and environmental measurement, this tradeoff provides a good balance between throughput and energy consumption.

The Narrowband-IoT protocol, as its name suggests, uses a smaller transmission bandwidth compared to conventional LTE: 200KHz versus 20MHz for Cat-0 and 1.4MHz for Cat-M. A reduction in transmit power further improves battery life and supports a 200kbit/s datarate for both uplink and downlink – tuned to be able to cover the majority of IoT application needs.

The changes that will come with Narrowband-IoT, which is currently going through the 3GPP standardisation process, extend range to that seen with EC-GSM but with a greater level of futureproofing and with a lightweight datalink protocol stack. The relative simplicity of the protocol also means the complexity of the modem silicon itself is lower – about half that of Cat-M.

A key advantage of the cellular protocols is their relative openness, particularly for device makers and integrators. The protocols can be incorporated into custom silicon, which can greatly reduce the cost of manufacture for medium- and high-volume sensor nodes. Networks such as LoRA currently have a restricted number of silicon licensees, which makes SoC integration more difficult.

The Need for DSP

With support for SoC integration, cellular provides the ability to optimise the system architecture of the IoT node. All of the cellular LPWAN-capable protocols can be implemented using software running on a power-efficient digital signal processor (DSP). Cat-M will need some additional dedicated coprocessors to support its more complex protocol. But both EC-GSM and Narrowband-IoT are expected to run on a DSP that supports instruction-level parallelism and a memory controller optimised for this class of application. Narrowband-IoT has the advantage that even the RF amplifier can potentially be integrated into CMOS silicon.

By implementing the baseband in software, device manufacturers and integrators can take advantage of the programmable DSP to support other functions. The system software may interleave communications processing with algorithms that perform compression and signal conditioning on the data they receive. Another important task that is readily handled by the DSP is that of using Global Positioning System (GPS) signals or their equivalents to determine the current location of the node. In many applications, being able to determine whether the sensor node has been moved will be vital to ensure that the correct data is being processed.

Thanks to the widespread availability of coverage and support for low-energy operation as well as the flexibility to support whatever level of integration each IoT device needs, cellular LPWAN technology already offers the best mix of features for the IoT. And the imminent arrival of support for protocols such as Narrowband-IoT will only augment that offering.